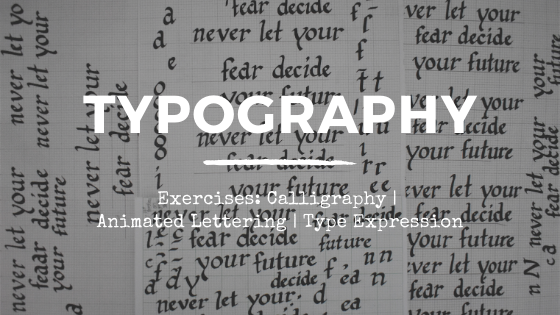 In this week’s class as homework, I was asked to draw out vertical, horizontal lines and circular lines on a graph paper using an Artline 3.0 calligraphy pen. The aim of this exercise was to get used to my calligraphy pens and to have constant strokes all the way.

Here is a complication of my process of trying out the calligraphy strokes on rough papers.

After getting used to drawing these strokes, I did a first and second attempt combining all three types of strokes on one paper.

After completing this exercise, we moved on to choosing our chosen hand that we are comfortable with the most. I chose the Roundhand foundation as I prefer to write with this hand.

After drilling on the alphabets of our chosen hand, we moved on to writing our favorite quote or saying that we like it. I chose a quote relating to fear. “Never let your fear decide your future“. I had to present the quote with an equal division between each line.

Practicing on A4 paper:

Final Outcome of Quote (A4 Paper):

For this exercise, I had to design five different styles of lettering of my own name. We only need to choose one word to describe ourselves. After choosing one style, we will animate a gif for that lettering style using Adobe Photoshop and Adobe Illustrator.

I chose “unique” as a word to describe myself. Being unique to me is being different and distinctive from everyone else. There is only a person like me in this world. I drew out five different styles to relate to the word “unique“.

After sketching, I decided to use my last idea sketch as it is easier to digitize and shows more uniqueness.

Using the sketch, I traced the sketch using the shapes and pen tool in Adobe Illustrator.

I realize that the animation was not smooth enough so I did another attempt by adding more artboards and it was better than the previous one.

For this exercise, we had to sketch and digitize six words that show its expression. We decide on the six words in class which were sparkle, float, blur, heavy, tall and rage. We were also given 10 type families to choose from to design the lettering of the words.

The ideas had to be in 80x80mm squares, leaving a 7mm vertical and 20mm horizontal gap on an A4 size document.

After designing six type expressions, we were asked to choose one to animate it. I chose to do “Float“.

After getting feedback from my lecturers on my float animation, I have decided to change to another type expression, sparkle as it would be easier to animate. I have decided to make the ring lighten up by its diamond which is the word “sparkle” with a few lines to give more effect.