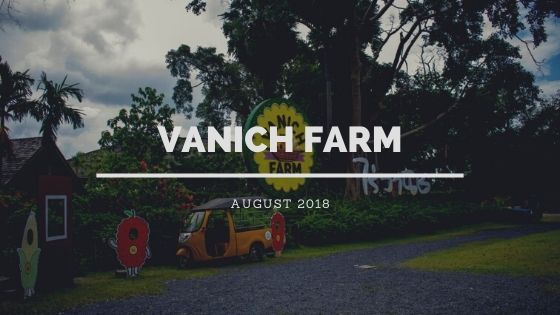 Have you ever had an experience of working and exploring in a farm? If you haven’t, come and visit Vanich Farm whenever you have a chance to go to Phuket!

Vanich Farm is located in Chang Wat Phuket and it is one of the best attractions to visit in Phuket. It displays the traditional Thai farming practices which include planting process, sweetcorn farming and feeding the farm animals. It is a cultural learning place where visitors can experience the farming life in real life.

There are many zones to go in Vanich Farm. Each zone has either an attraction to observe or a farming process to experience with. We even had a friendly guide to take us around the farm.

The main and the biggest zone to look for is the sweetcorn plantation.

After we looked at the sweetcorn plantation, we stopped by at a interesting and unique lake where there were plants surrounding it. The guide explained that these plants can only grow using dirty water and grow really fast. He even added that many people hate these type of plants and never wanted to receive it as a present.

Our next stop is the wooden traditional Thai houses that were made many years ago when there were no machinery and technology. The guide told us many stories about this house and the history behind it as well.

One of the best stories he told was the culture between the low class and the higher class. He said that a family that has slaves working under them would eat the last and the family members will take turns to take their share from the oldest to the youngest. The slaves would only be left with the bones or a few pieces of vegetables. In the past, a family would only have a big pot to cook their food under charcoal and no other kitchen appliances.

Before we went in, we took a selfie as a remembrance.

After visiting the wooden traditional house, we moved on to the next zone which was meeting the ducks and feeding the buffalo.  The ducks greeted us with a warm welcome by surrounding near the grass pathway area. They were really cute and adorable. I wanted to touch them but instead they ran quickly away from me.

The guide told us how to differentiate the old aged ducks and the younger ones. We could tell from the red spots near their beak. The more red spots they have, the more older they are.

Along the sides, there were padding fields laid across the lake. But we were not allow to do this activity as for safety reasons.

Meanwhile, we saw a group of buffalo lying on their bellies and moving their tail from side to side as they await for us to come and meet them. The guide gave us each a stalk of grass to feed the buffalo. As the worker led the buffalo to the gated area and tied the rope to the pole, we came nearer to it and fed it. It was really hungry at that time. His tongue could even sit still! It kept on moving as the grass went into its mouths =D

After meeting these friendly animals, we stopped at the plants and flowers section where we learn more about the plantation in this farm. Some plants were edible and most were used for health reasons.

The next zone was the feeding the sheeps. These sheeps were imported from New Zealand. There were both black and white sheeps. They were just very hungry like the buffalo. The best part was we teased the sheeps when we are feeding them with grass.

Nearby, we stopped to look at the trees that eats one another. The guide explained that the process and this helps the trees to be more stable and they grow really fast. Once another tree grows next to the eating tree, the tree again eats that tree and the cycle goes on and on.

And finally the guided tour was over… we thanked the guide for helping us tour around the farm and explaining every single detail. He was a great guide at telling interesting stories! He told us to help ourselves at the cafe nearby and try some of their corn drinks and chocolate lava brownies.

While we were having our break in the cafe, my dad, sister and I wanted to take more photos in the farm. I took photos of the horse while it was eating grass.

Here is a photo of me in the Tuk Tuk =D

And another one, I’m in the house!